When a decision is made to move a fermentation process into a bioreactor, the most common reasons behind such a decision are to provide a high-volume fermentation with a uniform and precisely controlled environment and even distribution of substrates. The efficiency of mixing of a fermentation liquor in bioreactors is vital for process control. The homogeneity of all components in a bioreactor (cells, metabolites, nutrients etc.) is essential for optimal conditions. At Cellexus, this is particularly important factor of our novel airlift bioreactor design. The CellMaker bioreactor bag does not contain impellers or other mechanical devices to assist in media mixing. Instead, the unique flagship geometry of the bag simplifies operation whilst being carefully engineered to provide uniform mixing by a directed flow of gas bubbles through the liquid.

Here we describe measurement of mixing times in the CellMaker Regular system. For this application note, the SOP used to determine the mixing time was the decolourisation method based on the DECHEMA guidelines – an expert group in bioreactor characterizations (Recommendations for process engineering characterisation of single-use bioreactors and mixing systems by using experimental methods, DECHEMA, 2016, ISBN 9783897461710).

A series of experiments was performed in the CellMaker Plus 8L and 50L single-use bioreactor systems with input air flow rates from 1 to 10 litres per minute (L/min). The experimental conditions were as follows:

Cameras were set-up for both front facing and side angles of the bioreactor. For an 8L of the medium in an 8L bioreactor bag, 4mL/L Lugol’s iodine solution and 5mL/L starch solution (10g/L stock solution) was added to bioreactor medium. The solution was allowed to mix for 5-10 minutes to ensure complete homogeneity and a regular flow pattern. Once the liquid flow pattern has stabilised, 4mL/L sodium thiosulphate solution (decolourisation agent, 0.2M stock solution) was added and the time to complete decolourisation was measured. The timer was stopped when colour change from dark blue to colourless was achieved throughout the bioreactor bag.

For 50L of the medium in a 50L bioreactor bag, the quantities of the Lugol’s iodine, starch and sodium thiosulphate solutions were added in volumes: 200ml, 250ml and 200ml, respectfully.

Due to a highly subjective nature of this assessment and the visual judgment of when full decolourisation has occurred, a large deviation in the obtained results is possible. Therefore, video recordings are vital to determine exact time points of test completion. Representative recordings of the procedures in this study are available on our YouTube channel.

A CellMaker system equipped with an 8L Enclosure is the most common choice among the CellMaker users. This model offers a highly adaptable fermentation scale from just 1.5L up to 8L and is ideal for pre-production and small production optimisation stages. Since the mixing efficiency will reduce, as the bioprocess volume increases, we decided to perform the mixing efficiency assessment at the maximum capacity and at a fixed volume of 8L of media. We investigated how efficiently the contents of the CellMaker bioreactor bag is mixed at 1L/min, 5L/min and the maximum air flow of 10L/min. Figure 1 shows the relationship between mixing efficiency and air flowrates. As expected, the time to complete mixing of the medium was the longest at the flowrate of 1L/min. Increasing the flowrate to 5L/min has more than halved the time required to mix the medium completely, and there was very little difference between mixing efficiency at 5 and 10L/min. We concluded, that at the maximum fill of the 8L bioreactor bag, 5 seconds is the shortest time necessary to completely mix the media. Importantly, the distribution of the colour within the bag, during the discolouring phase of the experiment, has not detected any dead space within the bioreactor. That indicates the efficiency of mixing provided by the unique geometry of the CellMaker bioreactor bag. 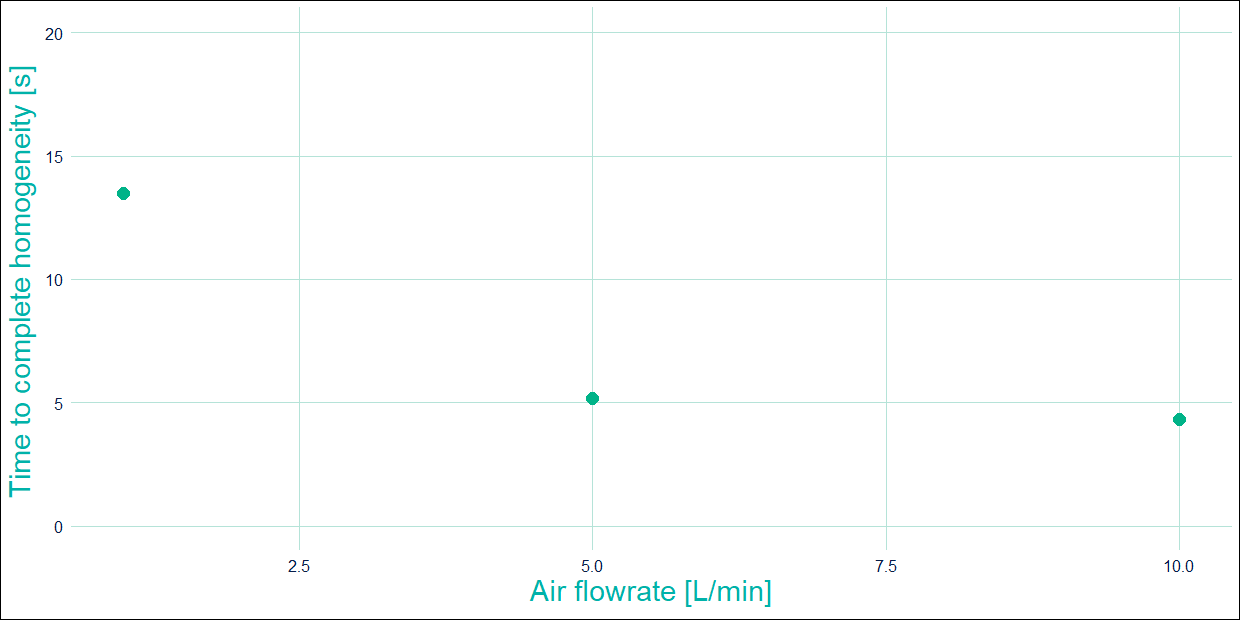 Figure 1. Time required for complete decolourisation of Lugol’s iodine-starch solution in a CellMaker 8L system with air flowrates of 1, 5 and 10L/min.

With the maximum capacity of 50L, the 50L Enclosure is ideal for a medium scale bioproduction processes. Such work will frequently involve injection of additives or feeds during the fermentation, or an advanced intervention, like perfusion, during a continuous batch fermentation. It is essential to ensure the contents of the bioreactor chamber is efficiently and thoroughly mixed throughout the process and no unmixed dead spaces occur. Moreover, at the increased volumes, the parameter of volume of gas passed through the media per volume of the media in each minute, usually referred to simply as VVM, is generally lower than in an 8L system. Thus, we expected the mixing times to be longer and we tested air flowrates of 1, 3, 5 and 10L/min. Figure 2 shows the relationship between mixing efficiency and air flowrates. The mixing times ranged from 32s at the flowrate of 1L/min to 11s at 10L/min. Once again, the pattern of decolourisation has confirmed no dead spaces forming in the bioreactor bag, even at such a high volume.

The mixing times in the 50L bag are longer than in the 8L bag, but this was expected. The VVM at 5L/min in an 8L system is 0.65. Comparably, to achieve the same VVM in a 50L system, the air flowrate would need to reach 31L/min. This would cause very high pressures in the bag, significant turbulence resulting in high shear forces and uncontrollable foaming of biological media. However, these results show, that mixing time in the CellMaker bioreactors is proportional to the VVM factor, as at 1L/min in the 8L bag (VVM of 0.125) and 5L/min in a 50L bag (VVM of 0.1) the mixing times are similar and continue at the same trajectory in both bag models. 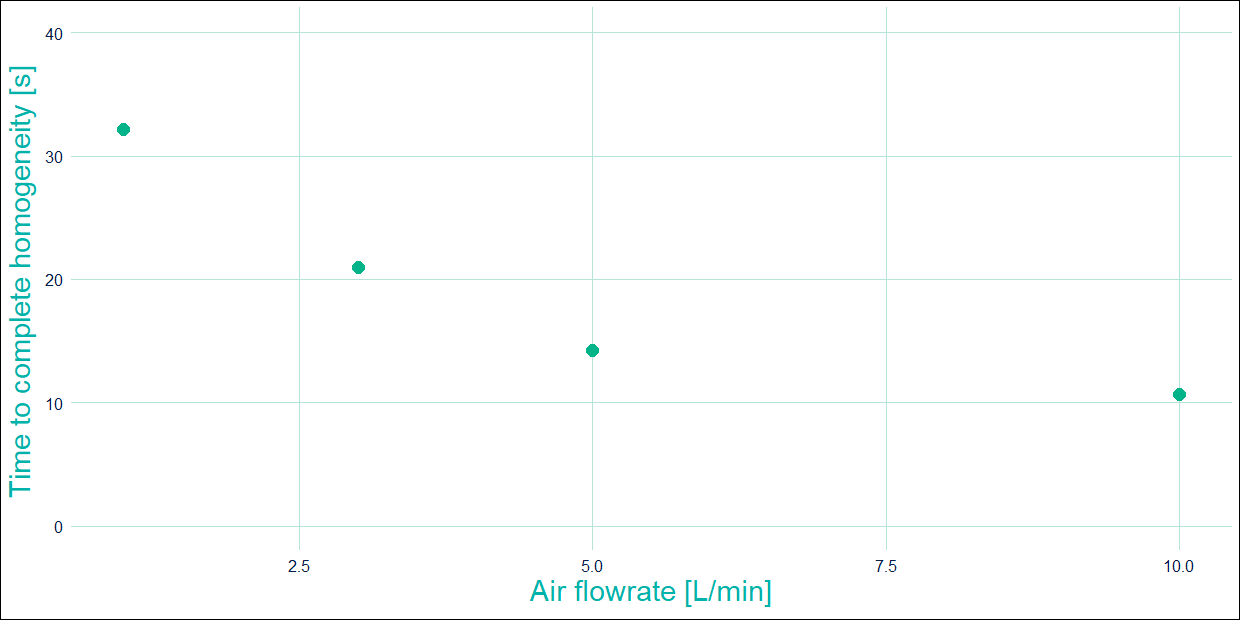 Figure 2. Time required for complete decolourisation of Lugol’s iodine-starch solution in a CellMaker 50L system with air flowrates of 1, 3, 5 and 10L/min.

In this report we presented data obtained in both the CellMaker 8L and 50L bags. The patented geometrical shape of the CellMaker bioreactor bags combined with the airlift aeration system, make the CellMaker a unique type of a fermentation system. In the CellMaker system, the shear stress is minimised, but the efficiency of fermentation media mixing remains high. We have compared the mixing times at two vastly different volumes, using comparable air flowrates. This has given us an overview of the VVM parameter in relation to mixing efficiency as well as the mass transfer coefficient kLa (Figure 3). The mixing times and the high kLa results, published in a separate White Paper, show inverted trends with the steepest slope up to the VVM of 0.25 and then gradually levelling off. 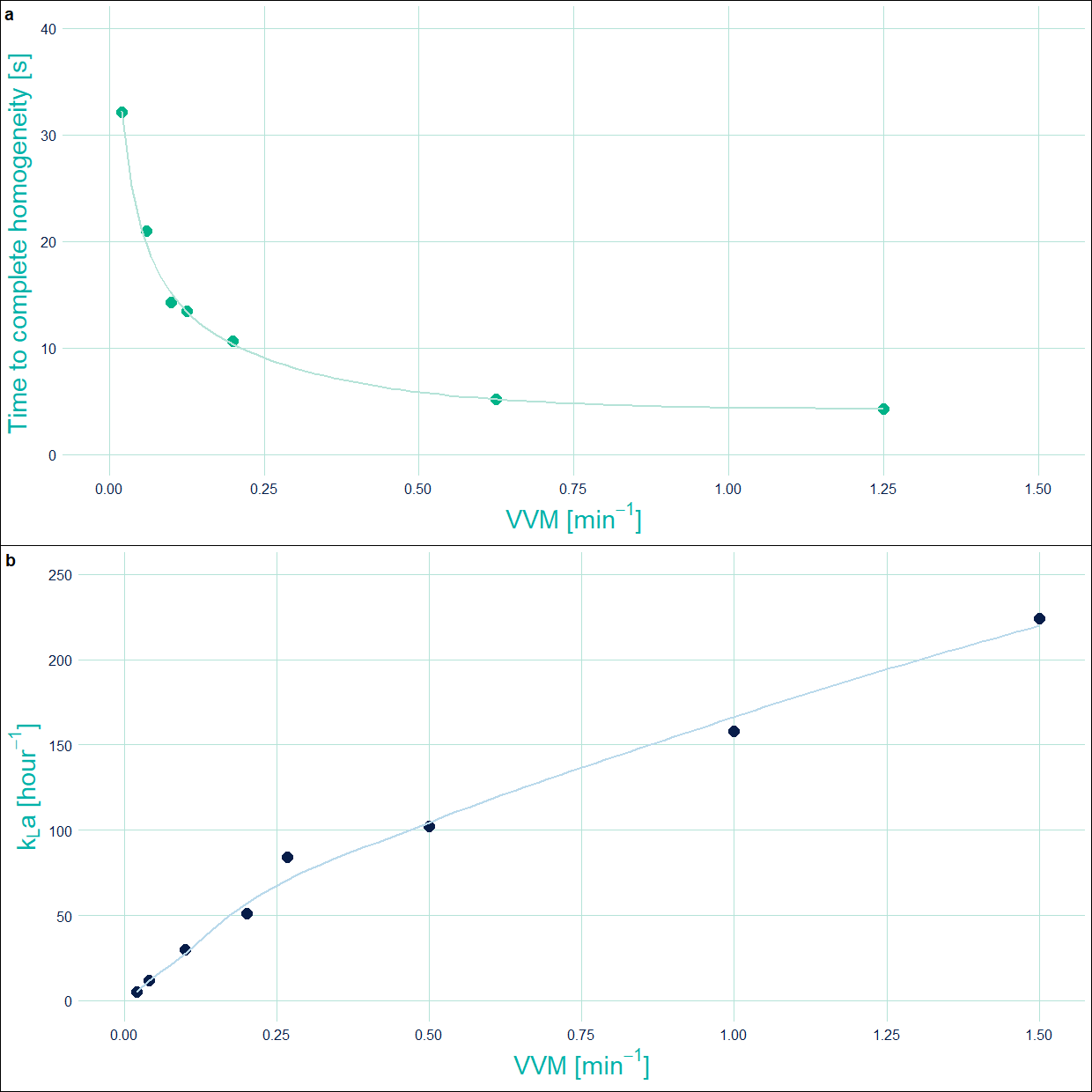 Figure 3. The time required to achieve complete mixing of the fermentation medium (a) and the mass transfer coefficient kLa (b) in relationship to the VVM parameter in the CellMaker single-use bioreactor systems. The graphs represent combined results obtained from the measurements in the 8L and 50L systems. Solid lines represent best fit curves.

This shows a direct relationship between air flowrate in the CellMaker systems and both mixing efficiency as well as aeration of the fermentation medium, further justifying selecting the CellMaker as a balanced fermentation system with low shear stress but maintaining high efficiency.