One of the main applications of the CellMaker bioreactor system is bacteriophage amplification. We have been working with numerous companies and below we have detailed some examples of our successful work with phages.

Cellexus carried out a demonstration at a clinical-stage company providing cost-effective cures for bacterial infections. As pH and dissolved oxygen monitoring were not points of interest, the CellMaker Regular 8L was used to look at amplification of the company’s proprietary phages.

Four litres of sterile TSB broth was pumped into the bioreactor, and 20mL E. coli was inoculated after temperature was achieved.

Phages were introduced after 85 minutes (in green), although the growth phase continued up to 105 minutes. After this point, the OD sharply declined and the solution went clear. The product was obtained by ultra-centrifugation and filtering through a 0.2μm, and the final phage concentration was 2 x 1010PFU/mL.

These are promising initial results for the first trial and are likely to be further improved with the addition of antifoam and optimisation to yield even better titres.

The CellMaker offers a fast and low-cost way to effectively manufacture phages for this biotech company.

Cellexus provided a demonstration at a biotech company that develops CRISPR engineered antibacterial products to see how well the CellMaker could amplify their proprietary phages. 3.75L of LB media was sterilised and pumped into a CellMaker Regular 8L with antifoam. E. coli was then inoculated and grown for 120 minutes.

Phages were introduced at 120 minutes (in green) at a titre of 1 x 106PFU/mL and the run was sustained for 4 hours.

The final concentration was recorded at 3.0 x 1010PFU/mL. At 30 times more than the starting titre, this was the highest amplification that the company has ever achieved with this phage and can be even further improved with process development.

In conclusion, the route to market in this instance is substantially reduced due to rapid E. coli growth and concentrated phage production.

A North American biotech company ran two different fermentations on the CellMaker Regular 8L to look at amplification of their proprietary phages. Pseudomonas aeruginosa was inoculated in the first run, and Staphylococcus aureus was inoculated in the second run. For both experiments, 4L of sterilised TSB broth was used and antifoam was added. 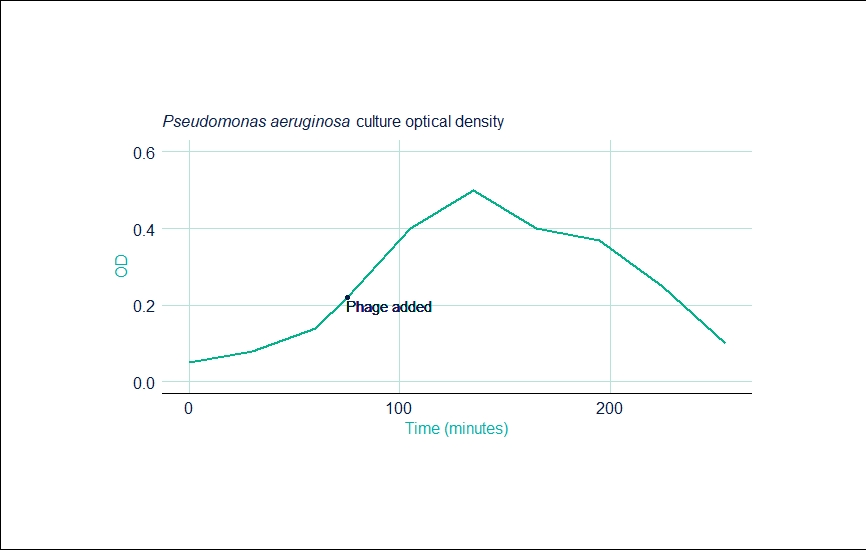 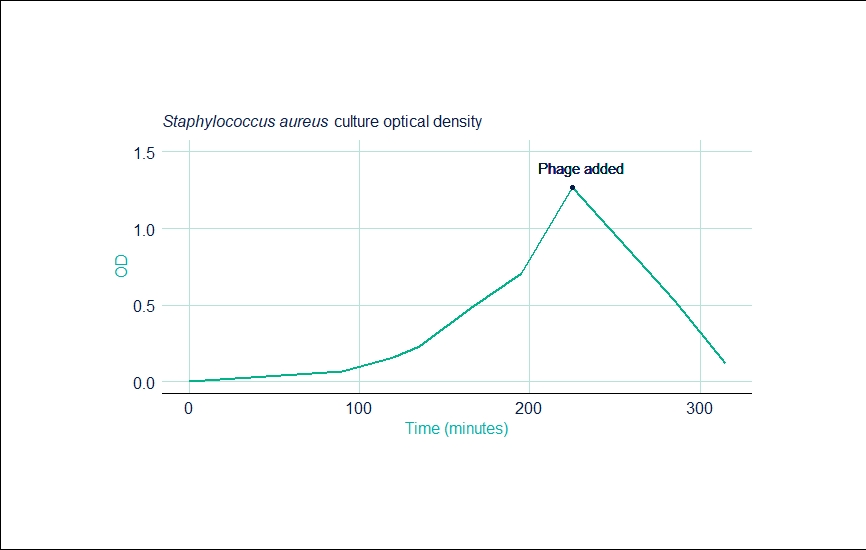 The first run gave a final PFU of 1.5 x 1010 per mL. The run also gave the same kinetics as a 100L batch already in production at the company—exemplifying the scalability of the CellMaker.

The second run was re-infected with phages after 225 minutes as the first infection was introduced at an insufficient titre. After clarification, the final concentration of the second run was 2.5 x 107PFU/mL and also gave the same kinetics as a 150L batch already in production at the company.

In conclusion, the initial results were encouraging and can certainly be improved upon with relevant optimisation. The parallels in kinetics to larger production batches display the capability of scalable processes with the CellMaker.