Antibodies are proteins within the immune system that identify and neutralise foreign proteins, or antigens. They exhibit a high level of specificity and affinity: two key functional characteristics that allow antibodies to be used as an integral tool in research, diagnostics, and therapeutics. Immunotherapy is gaining exceptional momentum in the scientific community, with a record number of antibodies being granted initial approval in the EU and US in 2018 (1).

Compared to polyclonal antibodies, monoclonal antibodies (mAbs) tend to have better batch-to-batch consistency and less background reactivity, enabling them to be a useful tool for in vivo research and applications. According to a 2017 report, the monoclonal antibody market is projected to grow from $403.7 million in 2017 to $1,151.5 million in 2022 (2)— further exemplifying the magnitude and potential of this application. Hybridoma technology was the first mAb production method that allowed for in vivo scientific research and is still the primary and preferred platform for mAb derivatisation (3).

One of the most common and traditional ways to culture hybridoma cells utilises flasks stored in incubators. These can be labour intensive to prepare and maintain, and often yield inconsistent results due to hot and cold spots in incubators, high risk of contamination, and human error that comes with the workload of maintaining the culture.

Dr. Jean-Christophe Bourdon, Head of the p53 isoform laboratory at the University of Dundee, and his team have been using a CellMaker 8L system to effectively produce a range of p53 antibodies from murine hybridoma cells. In this experiment, batch cultures were run in both the CellMaker and flasks, and the respective production of two different mouse monoclonal antibodies were compared. 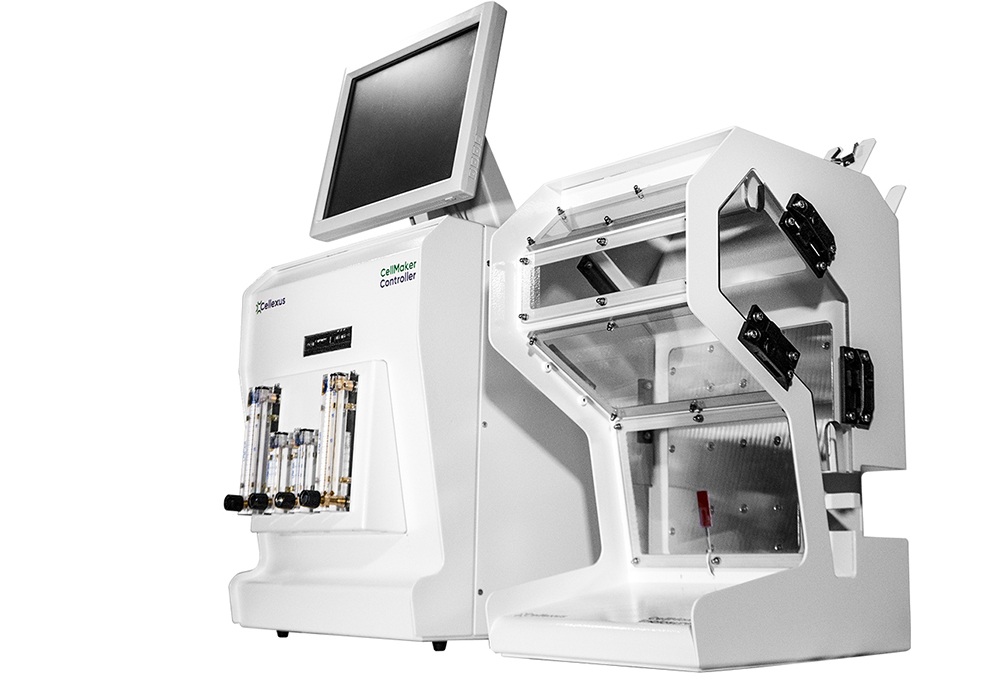 For this experiment, two production methods for two monoclonal antibodies were run in parallel: using a traditional flask method and using the CellMaker system. The method for each run is detailed below.

Under a fume hood, flasks were prepared and then stored in a 37°C incubator. They were checked routinely throughout each run to ensure no contamination was present.

The CellMaker 8L system that was used, enabled pH and dissolved oxygen monitoring and control. Under a fume hood, the sterile Cellexus bioreactor bag was fitted with two PTFE 0.2μm filters and an autoclaved pH probe. The empty bag was then fitted into the CellMaker enclosure, and the cells, media, and serum were pumped into the CellMaker bioreactor bag via a peristaltic pump and sterile tubing. For both runs, the following setpoints were defined by the user on the software:

Results of total mAb produced are detailed in the table below. The amount of antibody produced from the total volume of the CellMaker was compared to the total volume that Dr. Bourdon would typically produce in one run with flasks: 10 flasks of 30ml each, equalling 300ml. 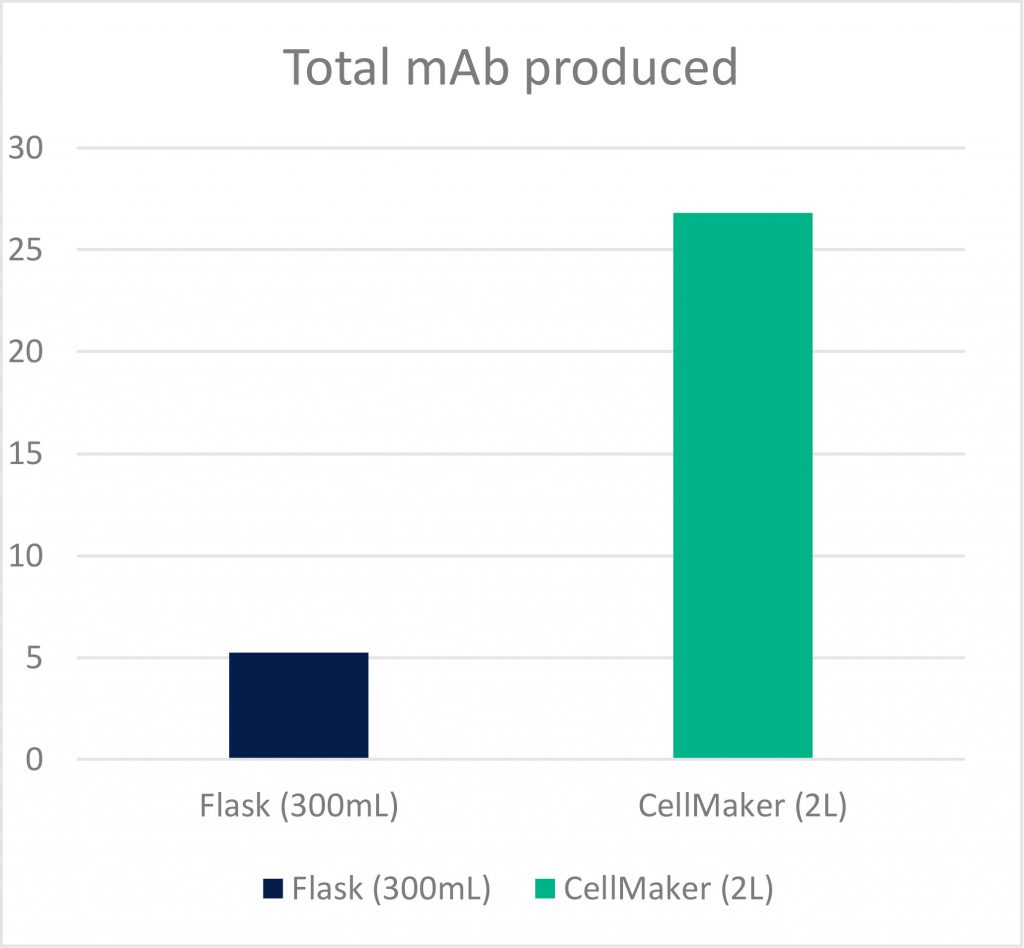 The main advantages that the user observed using the CellMaker include the reduction in workload, small laboratory footprint, and stability. In terms of productivity and practicality, the CellMaker was the preferred method of the user compared to their traditional flask method.

Compared to other bioreactors, the CellMaker is unique in that it is the only single-use airlift bioreactor on the market. Airlift technology is desirable for mammalian culture due to the gentle yet efficient mixing technique. Conversely, powerful impellors in stirred tank bioreactors run the risk of shearing cell membranes. The disposable aspect of the CellMaker eliminates the need for sterilisation and validation between batches, while significantly reducing the risk of cross-contamination. The clear side panels of the CellMaker also allow for better visual checks than stainless steel systems.

The CellMaker comes in two sizes, the 8L and 50L. Using just the 8L system to its full working volume would equate to 267 flasks of 30ml. Such a large quantity of flasks would require significant workload and numerous hours to prepare and harvest. In addition, each of the 267 flasks should be checked throughout the week to ensure there is no contamination. This kind of workload and incubator storage space is not practical.

In contrast, the user noted that the CellMaker required approximately five minutes to prepare, three minutes to harvest, and no additional time in between to maintain. Checking for contamination was as simple as looking through the transparent bioreactor front panels. In addition, the 8L CellMaker can sit on a benchtop and does not require space in an incubator, as the Peltier element fitted to the enclosure is an accurate and precise way to control temperature.

The CellMaker maintained constant temperature and pH throughout the run. Compared to incubator storage which can be contaminated easily and contain hot and cold spots, the contained, sterile CellMaker offers a much more stable environment for cells to grow and divide.

The media colour change due to lactic acid production is a visual indication that the run should be stopped, as antibody production is slowing down and the acidic environment runs the risk of degrading the quality of the antibody. Although this was observed in the flask cultures, the batch in the CellMaker exhibited different qualities. Throughout the runs, the pH was automatically maintained between values of 7.3 and 7.5, and the media did not change colour. This could indicate that the cells are remaining in normal metabolism, enabling long term growth and antibody production without increasing cost and labour. The resulting non-acidic environment could allow for greater quality of antibody.

For the same amount of time but far less workload and manual labour, the CellMaker provided a solution to scale up production of antibodies by 5-fold compared to flask production. Future experiments should test how long the culture could be sustained in the CellMaker before the media starts to acidify to evaluate the potential for even further antibody production. These results show that the CellMaker is a practical way to increase antibody production in a less labour-intensive manner in a single batch than the traditional method in multiple flasks.

“We have found the CellMaker reliable, easy to use, low labour intensive and invaluable in our antibody production process. Our qualified team likes working with this bioreactor, using the advantages of disposable technologies and its precise regulation of biochemical parameters (pH, pO2, temperature). At low-cost and with low labour, the CellMaker rapidly produces large quantities of high-quality antibodies with high specific activity. The CellMaker system is a vital part of the production process of our innovative and unique p53 antibodies.”
Dr Jean-Christophe Bourdon, Principal investigator, Head of p53 isoform research group, University of Dundee