Overexpression of recombinant proteins in bacterial strains, like E. coli BL21, is a widely used approach to produce large quantities of protein for scientific research or biotechnological applications. Traditionally, the cultures are incubated in flasks in an orbital shaker incubator and the process is easily scalable. However, not all proteins are equally easy to express and the yield of protein per litre of culture can vary greatly, depending on the target protein. Scaling-up a protein production frequently requires a fermenter or a bioreactor, and it is not always predictable if the scale-up will be successful. Here we present results of a scale-up experiment of a recombinant protein from a 4L total volume grown in multiple 2.5L Tunair™ flasks to 4L fermentation culture using a single-use bioreactor, the CellMaker, operating on the air lift principle. 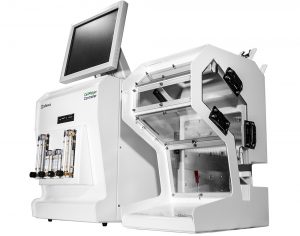 For protein overexpression, the E. coli strain B834 (DE3) was used. The gene for the protein of interest was cloned in-frame into the pET3a overexpression vector. The antibiotics were added to the media as required. For protein expression bacterial cells were grown in Terrific Broth (12g Bactotryptone, 24g Yeast extract, 4ml glycerol and 0.1M KPO4 per litre). The flask cultures were performed in a multiplicity of 333ml cultures in a 2.5L Tunair™ half baffles flask. The CellMaker bioreactor bag was filled with 4L of appropriate media and brought to 37°C prior to inoculating the cells. The airflow through the reactor bag was regulated during the run to compensate for the fermentation oxygen demand. 2ml of Antifoam was added to reduce foam build up during fermentation.

The cells were pre-grown at 37°C until the cell density reached OD600 of 0.6, at which point the temperature was reduced to 20°C and expression induced with 500µM IPTG. The expression was allowed to progress overnight, when the cells were collected. The cells were lysed using a TS Cell Disruptor and the His-tagged proteins purified on the HiTrap™ TALON® crude 5ml IMAC columns and eluted using an imidazole gradient. The protein purity was analysed on a 15% SDS-PAGE gel.

Test Protein 1 is an enzyme regularly produced in the lab for experimental purposes. An uncomplicated expression of large quantities of this protein is essential to provide smooth running of the experiments, and improving the yield of each purification of Protein 1 would be hugely beneficial. Traditionally the protein is produced in a regular flask culture, and after an overnight expression yields approx. 118g of biomass and 70mg of purified protein – 0.59mg of protein per gram of biomass. The protein produced in this way is eluted in a peak with 3 distinct local maxima and the SDS-PAGE analysis shows multiple non-specific proteins contaminating the elution fractions. 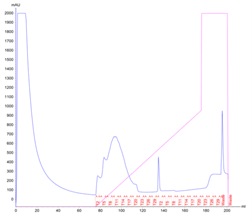 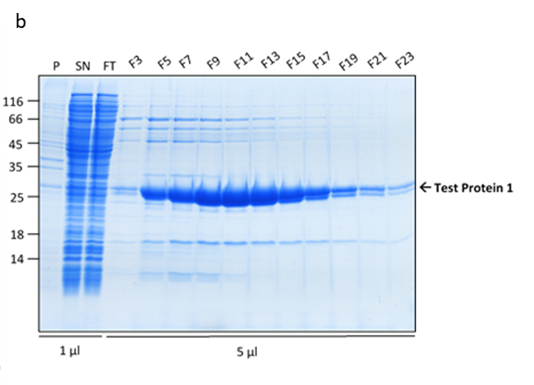 Figure 1. Protein 1 purification from a flask culture by FPLC (a). Sample UV absorption is presented in mAU against flow time. The purification phases of column loading, elution in an imidazole gradient and final wash are indicated as are the sample collector fraction numbers. Protein samples analysis on an SDS-PAGE gel (b) from the cell pellet (P), lysis supernatant (SN), unretained column flowthrough (FL) and elution fractions (F3 – F23). The sample volume loaded onto the gel is indicated.

During protein expression in the CellMaker, the oxygen demand of the growing cells can be monitored. This parameter is a good indicator of the metabolic state of the cells. During the initial growth of cells, oxygen demand is relatively low, due to low biomass in the culture and a relatively low metabolic activity and is easily compensated for with atmospheric air flow of 7L/min, which was maintained throughout the fermentation run. After protein expression was induced the oxygen demand has increased dramatically, however, the maintained high air flow levels allowed to maintain air saturation media at approx. 40% of the maximum. 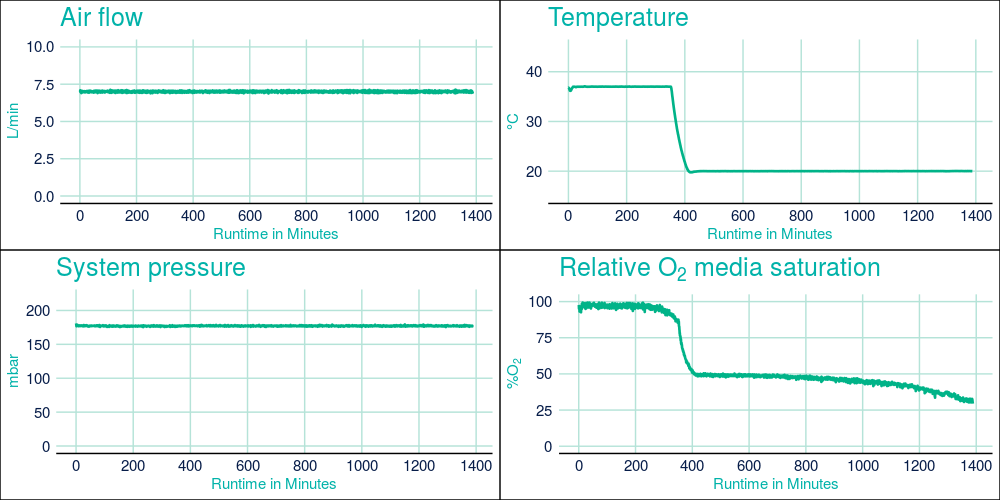 The culture has reached the final density (OD600) of 12.27 and the collected biomass after fermentation amounted to 105.64g, which is 11% lower than the average biomass achieved in a traditional culture. However, during the IMAC purification, it was noted that the peak corresponding to the usual retention time of Protein 1 (80-110ml) was significantly higher (1300mAU in comparison to 700mAU from a traditional culture). This was indicative of a higher protein yield. The analysis of the collected FPLC fractions on an SDS-PAGE gel showed the recovered protein to be of higher purity, in comparison to the traditional flask culture. The fully purified protein was quantified for 190mg resulting in the yield of 1.80mg/g. 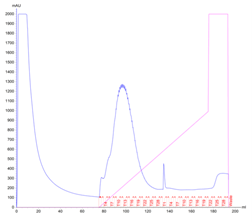 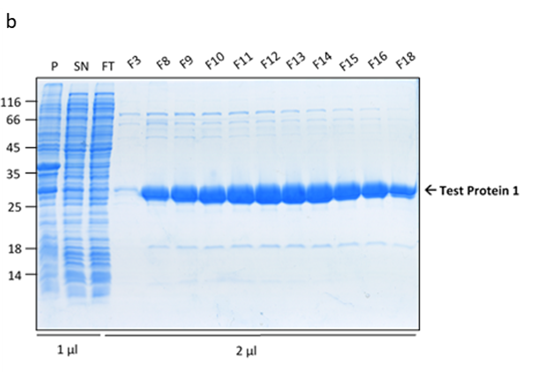 Figure 3. Protein 1 purification from a CellMaker culture by FPLC (a). Sample UV absorption is presented in mAU against flow time. The purification phases of column loading, elution in an imidazole gradient and final wash are indicated as are the sample collector fraction numbers. Protein samples analysis on an SDS-PAGE gel (b) from the cell pellet (P), lysis supernatant (SN), unretained column flowthrough (FL) and elution fractions (F3 – F18). The sample volume loaded onto the gel is indicated.

Increasing the scale of protein fermentation is a challenging task and the results are not easy to predict beforehand. Additionally, most fermenters rely on culture mechanisms significantly different from those in a shaker flask. In this example we presented a transition from a traditional shaken culture in Tunair™ flasks to a CellMaker airlift bioreactor bag, where the culture is both mixed and aerated by sparging of air through the culture. In this experiment, the overall bacterial biomass yield was 11% lower than would be expected from a combined yield of flask culture of corresponding cumulative volume, however, the absolute protein yield was 2.7x higher in the CellMaker. 190mg of protein was recovered from the CellMaker fermentation liquor compared to only 70mg from the corresponding flask culture, which translates to over 3x higher protein yield per gram of biomass. The online dissolved oxygen monitoring provided by the CellMaker bioreactor allowed for constant monitoring of culture aeration, which could be compensated for by regulation of airflow through the system. In particularly oxygen-demanding conditions, the CellMaker allows additional oxygen sparging from an external source through a dedicated and automated oxygen line and thus maintains high dissolved oxygen levels in the culture.

Unlike many other similar bioreactors, the CellMaker allows for efficient cooling of the fermentation culture and maintaining beneficial conditions for expressing and folding of proteins. The culture temperature was reduced by 17 degrees Centigrade in under 1 hour, shortening the delay between culture inoculation and protein expression induction in comparison to a traditional culture. Furthermore, active control of the culture temperature by the CellMaker ensured uniform temperature distribution throughout the culture, preventing unexpected shock to the cells throughout fermentation. This provides confidence that the process operates at the designated conditions.

In conclusion, we have shown that the CellMaker is capable of increasing protein production yield in a rich microbiological media (Terrific broth), allowing the culture to reach relatively high optical density without fed-batch fermentation. Oxygenation and mixing of the culture using airlift technology is beneficial for the bacteria to enable them to express higher levels of recombinant proteins. The built-in sensors provide the user with a constant control over the fermentation process and allow for automated finetuning to maintain the optimal conditions.