Agrobacterium is a Gram-negative plant pathogenic bacterium that causes infection in some plant species. Agricultural bacterial infections are becoming harder to treat, as harsh chemicals that used to eradicate these issues are not desirable nor sustainable solutions. Bacteriophages, a naturally occurring entity that kills specific bacteria, offer a viable alternative to protect crops against bacterial pathogens.

Rob Lavigne’s laboratory at KU Leuven in Belgium has used the CellMaker to amplify bacteriophages. Professor Lavigne has been working with phages for the past 20 years and oversees multiple bacteriophage research projects at the university. One of these projects utilises a proprietary phage against Agrobacterium for a crop protection application.

The CellMaker Regular 8L System was used to propagate the phage amplification. First, 5L low sodium LB broth was pumped into the CellMaker bioreactor bag along with the Agrobacterium inoculum. The optical density (OD) was measured at 600μm with a spectrophotometer, and the starting OD value was recorded at 0.05. The temperature was maintained at 25°C by the Peltier plate fitted on the back of the enclosure unit.

After eight hours, the bacteria had grown to an OD of 0.2. At this time, phages were added to the fermentation via the inoculation port on the side of the bag. The titre inside the bag at the time of infection was 105PFU/mL.

The run was stopped the following morning, roughly 15 hours after infection with phages. The final lysate titre was 1.25 x 1010PFU/mL. 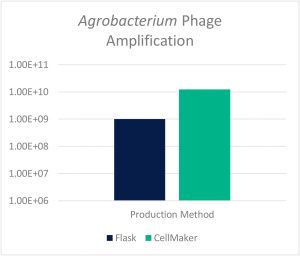 Previously, KU Leuven has amplified their phages in 500mL Erlenmeyer flasks. The bacteria are typically grown overnight to reach an OD of 0.3, then the phage inoculum is added. As shown in the graph above, this usually results in a final lysate titre of 109PFU/mL. The same process in the CellMaker resulted in a 12.5 times higher final lysate titre, despite inoculating the batch at a lower concentration of bacterial hosts.

This could be attributed to a better degree of control of conditions such as temperature. The CellMaker uses an integrated Peltier heater-cooler system, eliminating the need for storage in an incubator which can be subject to hot or cold spots. Consistent agitation from gas bubbles could also explain the difference in results.

In addition to a higher concentration, it is also important to note the quantity of lysate that the CellMaker is able to rapidly produce in one single batch. As opposed to multiple 500mL flasks, which multiply the chance of contamination, the 8L CellMaker Bioreactor Bags can hold working volumes from 3L up to 8L. 50L CellMaker Bioreactor Bags are also available, with working volumes from 10L to 50L.

In conclusion, the CellMaker provides a simple and ideal solution to amplify bacteriophages against Agrobacterium with more efficacy and convenience than the traditional flask method.

If you have any questions regarding this research, contact Jeroen Wagermans at jeroen.wagemans@kuleuven.be.