Nowadays, when the use of antibiotics in veterinary medicine has been restricted, bacteriophages are gaining popularity in the prevention and treatment of bacterial diseases. Polish company Proteon Pharmaceuticals, which is directed towards the production of pioneering and innovative treatments, medicines and vaccines in the veterinary industry, is working on a bacteriophage cocktail for prevention of Salmonella infections in farm animals.

The CellMaker is an easy to use, unique airlift single-use bioreactor suitable for bacterial cultivation. Thus Proteon have evaluated this system for bacteriophage production on Salmonella enterica serovar Enteritidis culture.

The CellMaker Bioreactor was filled with 5L of LB cultivation media and pre-warmed to 37°C. Then media was inoculated with overnight culture of S. enterica Enteritidis strain. The bioreactor was supplied continuously by 5L of air per minute and the temperature was stable at 37°C. Optical density of growing bacteria was measured every half an hour. When density reached OD6000.4-0.5 (2h after bacterial inoculation) the inoculum with bacteriophages, specific for Salmonella, in amount of 5×107PFU (Plaque Forming Units) was added. Then the culture was sustained for another 3h to let the bacteriophages amplify. Samples were taken to measure titre of bacteriophages (in PFU/ml) and optical density of bacteria. Another process in the same conditions but without bacteriophages was conducted as a control to compare the growth of bacteria.

The results are shown in the table below. 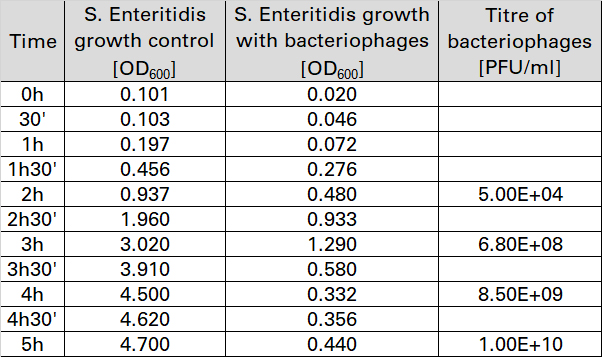 The kinetics of optical density of bacteria growing alone and with bacteriophages was compared and is illustrated in the graph below. The dashed line represents bacteria growing alone and the continuous navy line shows the changing optical density when phages were added to the culture after 2 hours. The orange line represents the growing number of bacteriophages. 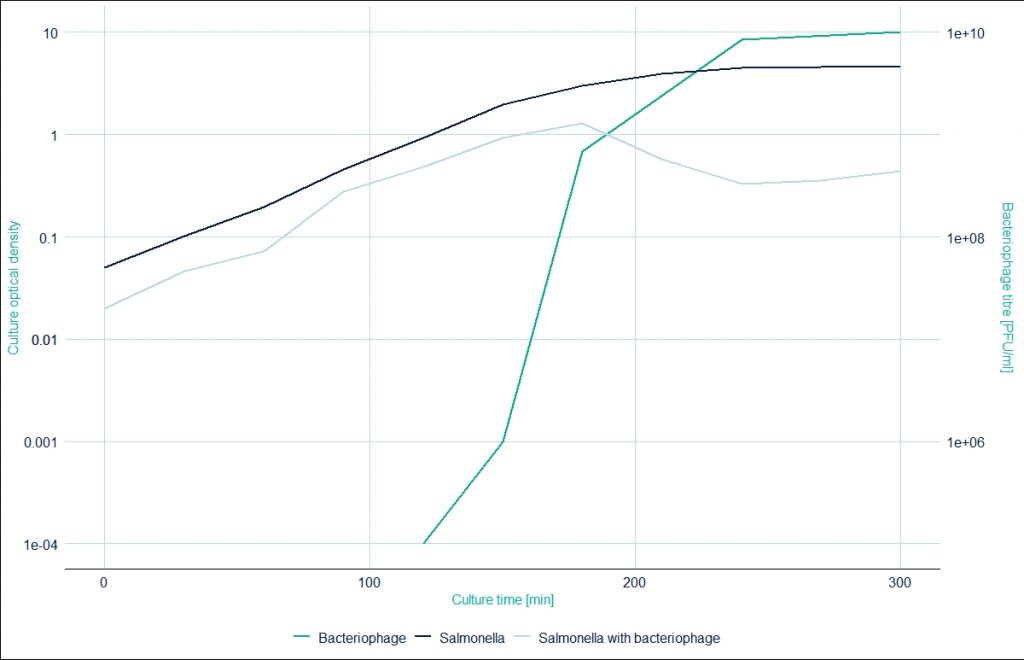 The CellMaker is a user-friendly ready-to-use system for production of bacteriophage, and the single-use CellMaker bioreactors, that does not need to be sterilised prior to cultivation of bacteria, is a great alternative to traditional bioreactors. The integrated control software allows for continuous control over the conditions in the bioreactor and samples can be taken from the culture during cultivation without pausing the system. The results prove that the CellMaker bioreactor system can be successfully used for cultivation of Salmonella enterica serovar Enteritidis and further high amplification efficiency of bacteriophages. Since, additional optimisation of the process has been carried out to improve the yield of bacteriophages and is now used as production process.

“Thank you for your accurate installation of your CellMaker machines in Proteon Pharmaceuticals (Poland). We have found the CellMaker reliable, easy to use and invaluable in our Pharmaceutical processes. Our qualified team likes working with this bioreactor, using the advantages of disposable technologies. The CellMaker produces the quantity and quality of bacteriophage that we are looking for. The 4 CellMaker systems have become a vital part of a production process of our innovative BAFASAL® product.”