Case Study: Using the CellMaker to produce and increase expression levels of a protein in Pichia pastoris

The Laboratory of Molecular Biology in Cambridge used the CellMaker Regular to increase protein expression yields of a 44kDa His-tagged protein in Pichia pastoris in a rapid, proof-of-concept experiment.

Pichia pastoris is a strain of yeast that is very often preferred to Saccharomyces cerevisiae, other yeast strains, and E. coli because it generates more human-like glycosylation patterns / structures within recombinant proteins. As a result, it has become a major method of recombinant human protein expression. Expression is driven by the tightly regulated AOX1 promoter, which is induced by methanol. Secretion of recombinant protein (directed by a signal sequence) into the media simplifies the downstream protein purification process.

The target protein (44kDa) contains a C-terminal His-tag. It is secreted into the supernatant using alpha-factor signal sequence. The expression levels are very low (<50ug/L) when produced in shaker flasks. A modified BMMY media was used and supplemented by the addition of 1% MeOH and 0.1% glucose every 24 hours.

The table below outlines the settings and readings from the Cellexus CellMaker during this experiment.

The graph below shows the increased OD and relates to the yield of biomass compared to shaker flasks prior to harvesting from a 6 litre fermentation.

In this sample enhanced aeration was achieved using an oxygen enriched gas supply at 4L/min oxygen and 2L/min of air. Higher ODs resulted in 1.5-fold increase in biomass and 2-fold increase in protein yield (as determined by western blot analysis). Protein was found to be glycosylated correctly and was secreted appropriately into the medium prior to purification. 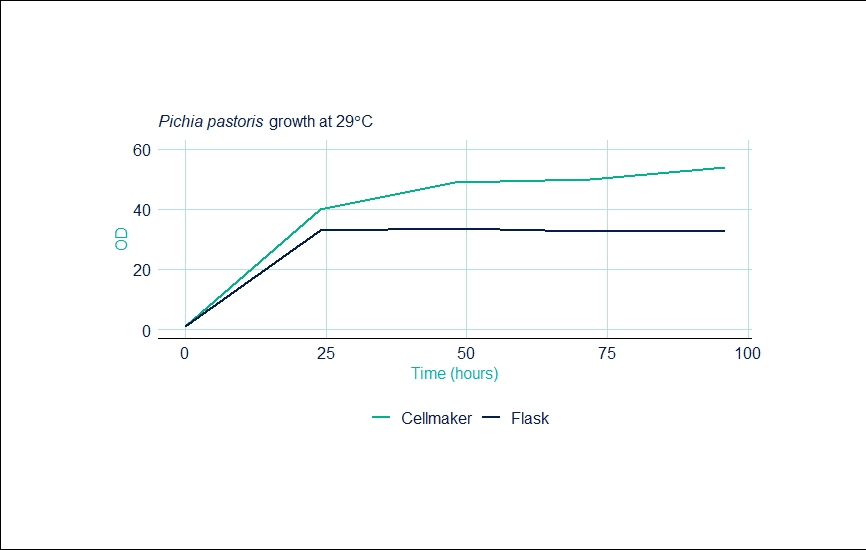 The data generated here shows that the 2-fold increase in expression levels of protein can be quickly achieved by switching from shaker flasks to a single-use bioreactor in a proof-of-concept of this type. With additional optimisation using the CellMaker it is likely that the yield of protein will be further enhanced. Scaling from the 8L unit to the identically designed 50L unit may offer a further 6-fold increase in yield.